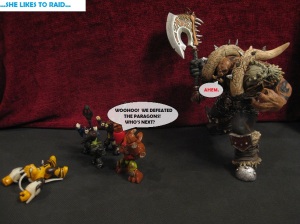 This was my Furtive Father Winter gift to Navimie of The Daily Frostwolf.  The event was put together by Akabeko of Red Cow Rise.  I can’t believe it’s been a whole year since I made one of these, apparently I need to a Furtive Father Winter every week in order to make them regularly, lol.  I’ve been brainstorming a lot of ideas lately and acquired new “stars” to feature in future posts, now I just need to stop slacking and put them together already!

Another year in the books, a new year to look forward to.  Lol, wow I really did slack off in the last quarter of 2013, hopefully I can back on the ball and start posting regularly in 2014.  Thanks again to those who’s visited and commented on my blog. =)

The WordPress.com stats helper monkeys prepared a 2013 annual report for this blog.

The concert hall at the Sydney Opera House holds 2,700 people. This blog was viewed about 33,000 times in 2013. If it were a concert at Sydney Opera House, it would take about 12 sold-out performances for that many people to see it.

Holy cow it’s been a long time since I posted on my blog!  I have so much to talk about that I’ll have to save it for future posts, but today I want to share with you my Furtive Father Winter gift from Libby from Lib Feathers!

Silver Medals: an Ode to the Challenge Mode Noobs

(tune of Silver Bells, of course)

Silver medals, silver medals
It’s Challenge Mode in the dungeons.
Fighting hard, kill them all.
Soon it will be Phoenix day.

Shado-Pan monks, martial arts monks,
Dressed in Pandaren style
In the air
There’s a feeling
of corruption.
Serpent flying
Cloudstrike fighting
Go through phase after phase
Till you burn them all down and they die.

Next the Sha who
Is so violent
Spikes and smashes his foes
But the heroes prevail
and loot treasures.

Taran Zhu next,
Filled with hatred.
The monastery’s big scene
Don’t get mad and you’ll win this one, too.

Silver medals, silver medals
It’s quiet now in the monastery.
Sha of Violence is no more.
Soon you will have your Phoenix mount.

This poem is pretty awesome!  The funny thing is that in my months-log blog silence, we did end up getting our final silver and our mounts; I’ve just been a total slacker about posting it, lol.  Thanks again Libby for the gift and thanks to Akabeko for hosting this event again!

Challenge Mode Noobs.  I think we need to change that name to Challenge Month Noobs, lol.  Whether it’s because someone’s out and we don’t have a full group to run CMs or just having frustrating weeks where we keep missing the silver timer, it seems like it takes a month before the CMN can scratch up a new medal.  It was about a month ago that we got our last silver in Stormstout Brewery and a month before that, it was a silver in Scholomance.  To keep that pattern going, we took on Scarlet Monastery on Saturday, which has been giving us issues for the past couple of weeks.

We had another CMN line up change this weekend.  Voros, a DK and fellow Frostwolf, took Sev’s dps spot for our Scarlet run.  He’s been running in our group lately and even helped Luxy, Lush, Navi and Sev get a silver in Gate of the Setting Sun, which I already had from an SR run a while back.

I also didn’t something different that I had never done before in all of our CM runs…I actually went dps instead of tank!  Yep, you heard that right, no tanking for me this time around.  I’ve been running around the Timeless Isle and LFRs as Ret and having some fun with it that I decided to give the tank reins to Lush’s monk, Aimei, and try dpsing for a change.  I specced into Repentance to give us another CC, instead of using Fist of Justice, which I use while tanking to get two stuns out every minute.

As per CMN protocol, it took us a couple attempts and resets before we got that winning run in, we even managed to handle the trash after Thalnos the Soulrender perfectly, which had caused us so many issues before.  A handful of mobs and a Korloff, Durand and Whitemane kill later, we finally, finally had our silver. 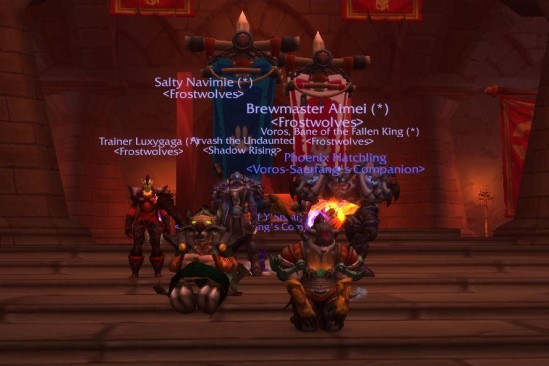 With that silver, that puts Navi, Luxy and I one more away from getting our Pandaren Phoenix mounts.  Woo!

So the last silver we need is in Shado-Pan Monastery, which is gonna be the toughest medal to get.  We gave it a couple tries and boy were they rough; Gu Cloudstrike is not melee friendly and the Sha of Violence just gassed out Navi and her heals.  It’ll take us some time and practice to get through, stay tuned for the next CMN update in a month! (or sooner) =)

So I had my first taste of Flex raiding yesterday as I was invited to one by Navi, Luxy and the rest of the Frostwolves.  Navi told me prior that they had planned to do their guild Flex raiding on Sunday nights at 8:30 pm Aussie time…which meant 6:30 am my time.  Yeah, I know, who the hell wants to raid that early in the morning, lol.  But I wanted to give it a try and I’ve always wanted to raid current content with them.  So I sucked it up and got myself up early to do it….although next time I’ll give myself a little more than three hours of sleep to prepare for it, lol.

I had leveled up and maxed out a new Death Knight, Daemagor, in Navi’s guild on Saurfang last week and tried to gear him up as much as a I could.  There is no ilvl restriction for flex raids and even though Navi said everyone needed to be at least ilvl 480, I wanted to push for the LFR minimum, which was ilvl 496.

I managed to get a bunch of Timeless gear drops while farming the Isle, but I could only manage to get to 483.  My weapons are going to be hard to replace; I’ll have to either get them from Throne LFR or even get the PvP ones.  I wasn’t too happy with Dae’s dps at the moment either, so I brought my hunter Rasfari instead, who is my best-geared dps toon right now….and I also enjoy huntering at the moment, so…=P

Anywho, 6:30 am/8:30 pm rolls around and Navi starts assembling the raid together.  We get about 13 or 14 peeps on when she tells everyone to start heading to the instance.  Ras was on the Timeless Isle, so I hearthed back to the Shrine for a short run to the Siege portal.

When I tried to pass through the portal, I got a message that I needed to be on the correct realm in order to enter this raid.  Crap.  I guess I had to take Dae then.  I dropped group and switched over to Saurfang and onto Dae.  Navi then whispered to me, asking what I was doing and I told her that I couldn’t get into the raid with Ras and the message.  Apparently, flex raids work like LFR queues, where you actually have to queue up for them, like you do with dungeons and scenarios.  So I switched back to Ras and apologized to Navi for my noobishness.  /facepalm

After finally getting in, we headed towards Immerseus, clearing trash along the way.  An epic ilvl 540 BOE item dropped from one of the puddles, which I didn’t know could happen in flex, but was cool nonetheless.  As the tanks were explaining the strat to those who didn’t know the fight, we started summoning others to the raid and got the raid up to 23 people, woo!  I was a little concerned, though, as my PC doesn’t do well on graphics-heavy fights, like Elegon in LFR, where everything and everyone moves at a snail’s pace to me.  But it turned out not be an issue for me for that fight and the rest of them we did.

So I got paired up with Luxy in my slice of the room and I told her I would be misdirecting everything her way, lol.  My laughs didn’t last long though; I thought I was doing well dpsing down the Sha puddles after the first split, but then I guess I got one-shotted by the Contaminated ones that didn’t get healed and reached Immerseus.  Quite a few others died too, so I ended up watching the rest of the fight from the floor.  I think we ended up killing Immerseus with about a little less than half of the raid alive.  Oh well, a kill is a kill, right? =) 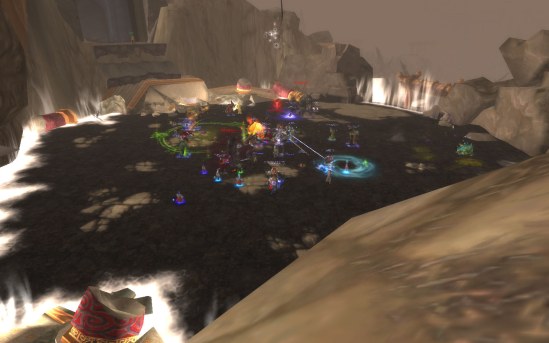 So we moved on to the Fallen Protectors, which went a lot better for me, no dying this time, lol.  We did have a hiccup at the end of the fight where we didn’t kill all the Protectors at the same time within 10 seconds and they all healed up back to 20%.  We pushed them back down, this time waiting until they got really low before taking them out.  It only took us one attempt to do, so that was good.  I’m hoping SR’s raid this week is just as easy, lol.

Next up was the Norushen encounter, which isn’t a fight against him, per se, but more of a “cleaning up” fight, like Immerseus.  I hadn’t seen the fight before, so tabbed out to quickly read about it.  We put in a good handful of attempts, but we couldn’t get past this fight.  The fight seemed to be a dps check of sorts, I’m not sure if not having enough raw dps was the issue or not having enough of the dps getting rid of their corruption fast enough, but our best attempt was 20% before we hit the enrage.  Maybe we’ll get it next time.

All in all, I had a fun time in my first flex raid.  It was nice to sit back and just pew pew for a change, not having to worry about holding aggro, grabbing adds, tank swapping and all the other stressful tanky stuff.  Thanks again to the Frostees for letting me join in their flex raid!